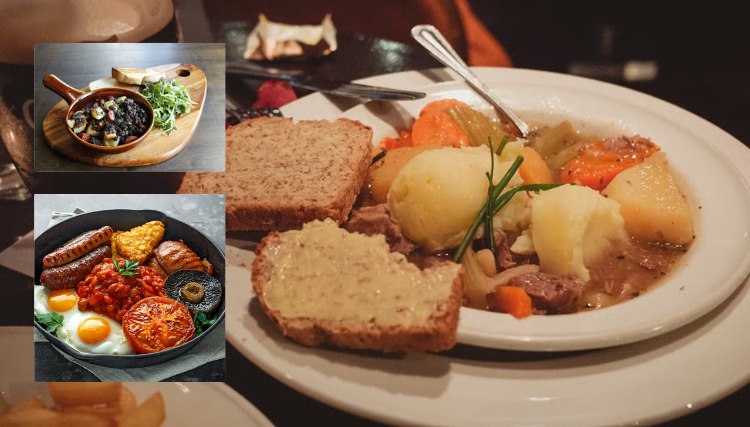 What Does A Traditional Cuisine Look Like In Dublin

Delicious cuisine is the food for the soul. Only a foodie will admit his love for global flavors. Are you planning to go to Ireland and wondering what the traditional cuisine should look like in Dublin? Well, then, you have landed on the right page. Here we will guide you about some of the best traditional food and drink you must try on your upcoming Dublin trip.

Ireland has a rich cultural background and a glorious past. You must have heard about the potato famine in Ireland long back in the medieval era. Although most Irish dishes contain potatoes, you still have a variety of delicious cuisine to explore once you are at the heart of Ireland.

Irish cuisine is unique, rich and pleasant to your taste buds. The food habits of Ireland have been influenced by many different cultures and various historical events. Some of the most popular Irish dishes other cultures adopt are stew, fish and chips, bacon, and cabbage.

So waste no more time, and let's get started. Keep reading about these unique cuisines you must not miss in Dublin.

Irish Cuisine is incomplete without potatoes, and this traditional Irish potato pancake is prepared by combining raw potato in grated form with cooked mashed potato and flour. It also contains fresh milk to form a smooth batter and then the chef slowly cooks the concoction like a pancake in medium flame until it is golden brown. Boxty pancakes are generally eaten with a dash of butter or with a pinch of sugar. It is served in various traditional Irish restaurants with a complete Irish breakfast consisting of eggs, sausage, bacon, toast, black pudding and tomato slices.

Where To Find: You can try it at the following place

The Gallaghers Boxty House in Temple Bar is best known for its lip-smacking boxty pancake and Irish food.

Another Irish dish that contains potatoes is the Colcannon. It is a traditional Irish dish made of mashed potatoes with leafy greens like kale or cruciferous vegetables like cabbage.

This traditional dish is generally served during Halloween. It was prepared in the 18th century after European potatoes were first introduced. Later the dish was modified a lot, and nowadays, it can be called a perfect mix between ancient and modern Ireland as it contains the best of two worlds.

If you are in Ireland and looking for vegetarian Irish cuisine, which is delicious and famous, this can be a great option for you. This dish is simple to prepare but imparts a great taste. If you are vegan, ask the cook not to mix milk or butter in it. Although most restaurants don't add milk or butter in some cases, they might add it to enhance the taste. So be sure before ordering.

Where To Find: As it is a Halloween dish, it is not always available on menus. But some Irish pubs in the middle of Dublin serve it throughout the year.

This is considered to be the healthiest breakfast in Ireland. Black pudding is a sausage made from meat, oatmeal, fat, blood and bread or potato fillers. If you're skeptical about eating blood, then try out the white pudding, which contains almost the same ingredients without the blood.

Where to find: Most of the restaurants and hotels in Dublin offer it in the breakfast menus but if you are willing to splurge a bit, then go for The Pig's Ear (4 Nassau St) for a classy and traditional wholesome breakfast meal.

It is a classic Irish food which is famous throughout the world. It's made of leftovers that include lamb, onions and potatoes. The Stew was originally prepared by farmers in the early ages and medieval era, so it is also a traditional dish.

Where To Find: It can be found in the following place

Although not a dish, it's a drink that is worth mentioning. Jameson Whiskey is one of the oldest yet most popular whiskeys in Ireland, founded in 1780 by John Jameson. So if you are in Dublin, don't forget to try it out.

Where To Find: Find it at Jameson Distillery at Bow Street

So if you plan to go to Dublin, you must try these five cuisines mentioned above. Although you can try a variety of other cuisines too, that can be a little hard on your pocket. Plan your trip in advance to avoid last moment chaos. And yes, do not forget to call Especial Rentals for its special short-term vacation rentals in Dublin